A video talk with guided practices given at the invitation of AUSTAT on 5 Feb. 2021. 630 people registered to watch.

A talk accompanied by demonstration turns at an open evening in Melbourne, Australia in February 2020. Filmed by Ric Pellizeri.

Reliable Sensory Appreciation: To Feel, or not to Feel?

Hands on Back of Chair

A quick two minutes guiding a student on how to direct hands, arms, and shoulders along with head, neck, and back when practising this manoeuvre. Filmed by Philip Nessel at an AlexanderTechniqueworkshops residential in 2014.

A discussion on why some Alexander teachers’ “non-doing” hands seem lifeless while others are lively and energised. Question and editing by Cindi Kim. Photo below illustrates the exercise described in the audio discussion. 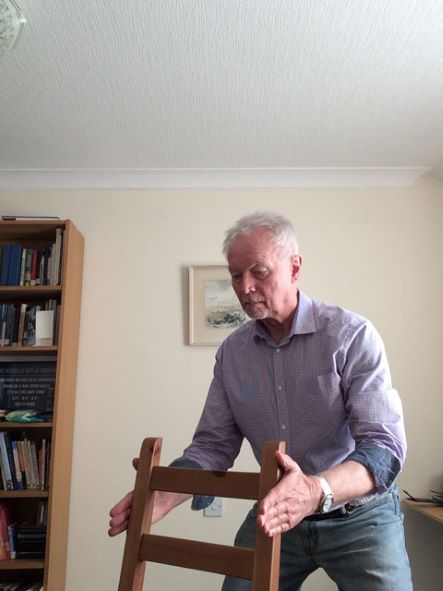 Training and Teaching with Walter Carrington

Giving a First Lesson to a New Student

Thanks to Conchita Forn Donat of Barcelona a Spanish translation of many of the following articles and lectures is available here.

Download further reading about the Alexander Technique for students, trainees and teachers.

It’s a Growth Process!
My contribution to the book Living the Alexander Technique Vol. II, ed. Ruth Rootberg. See www.levellerspress.com/product/living-the-alexander-technique-volume-ii-aging-with-poise/ Contains an account of my years with the Carringtons and extensive discussion on how I view and experience the Technique now. (Published in July 2018)

FM Quotes on Developing a Reliable Sensory Appreciation
Taken from his four books and other direct sources.

Review I of teachers workshops in Melbourne, Australia
Published in AUSTAT Journal May 2015

Review II of teachers workshops in Melbourne, Australia
by Megan Taylor, May 2015

Explaining the Alexander Technique
Published in the AmSAT Journal: Spring 2014

John Nicholls’ Lugano 2008 classes
This is a description of the Continuous Learning classes presented by John Nicholls at the 2008 Alexander Technique International Congress in Lugano, Switzerland. Demonstrating how classic Alexander procedures enable integration of limbs with head, neck, back, and how this feeds into hands-on teaching skills.

Development of Skill with the Hands in Teaching
John Nicholls, c. 2005
Effectively a summary of the stages of development during a three year training, and the most important practices employed during this process.

The Training of Alexander Teachers
John Nicholls, 1998
Published in The Complete Illustrated Guide to the Alexander Technique. Element Books 1998.

Alexander Teaching
John Nicholls, c. February 1991
Originally written at the request of Dilys Carrington after some meetings of STAT Heads of Training in London.

The Use of the Chair in Teaching
John Nicholls
Published in The Alexander Review, 1987

Modern Neuroscience and the Alexander Technique
This is a description (originally published in AmSAT News summer 2007) of a workshop presented at the 2007 AmSAT AGM by John Nicholls and Dr. Glenna Batson. Unlike the next two articles, it considers the Technique in the light of a recent trend in neuroscience to downplay the influence of reflexes and emphasize experiential learning.