People have Alexander lessons for a variety of reasons. Some come with physical ailments, e.g. neuromuscular or joint problems, bad backs, breathing difficulties or tension problems.

Others come simply because having Alexander lessons makes them feel better.

Many, such as sportspeople, musicians or other performing artists, come in search of greater expressive  freedom and poise in their chosen field.

And for some, the Alexander Technique becomes a fundamental practice for living; a personal resource for choosing clarity of consciousness and coherence of energy.

“We already notice , with growing amazement, very striking improvements in such diverse things as high blood pressure, breathing, depth of sleep, overall cheerfulness and mental alertness, resilience against outside pressures, and also in such a refined skill as playing a stringed instrument.” – Prof. Nikolaas Tinbergen, Nobel Prize for Physiology, 1973

How is it Taught? 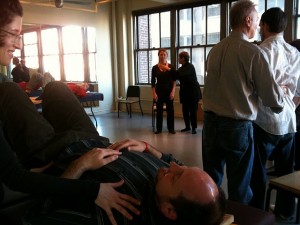 The technique is typically taught on an individual basis.  It is also offered in group classes, however the work remains best supported by a course of private lessons.  As with the learning of any skill, duration of study depends upon your initial condition and your personal goals.

“You can’t do something you don’t know if you keep on doing what you do know.” – F.M. Alexander

The Alexander Technique is part of the curriculum at: